This is a book about memory and a moment in cultural history. It is also about stories and storytellers, both those who use words and those who draw pictures. ...

For thirty years, from 1941 to 1971, CLASSICS ILLUSTRATED (originally known as CLASSIC COMICS) introduced GIs, bobby-soxers, and their baby-boom children to "Stories by the World's Greatest Authors"--a category that encompassed Homer's ODYSSEY and Frank Buck's BRING 'EM BACK ALIVE, Shakespeare's HAMLET and Talbot Mundy's KING--OF THE KHYBER RIFLES, Goethe's FAUST and Owen Wister's VIRGINIAN. Although the comic-book series of literary adaptations and biographies was disparaged by educator May Hill Arbuthnot and attacked by crusader Fredric Wertham, it gradually won the applause of skeptics and the affection of at least two generations.

By the mid-1950s, with more than 100 titles published, a JUNIOR fairy-tale and mythology series underway, and sales in the millions, the Gilberton Company's CLASSICS ILLUSTRATED had become as much a part of growing up in postwar America as baseball cards, hula hoops, Barbie dolls, or rock 'n' roll. The ubiquitous yellow banner attracted a variety of young readers, whether they were students who wanted to take short-cuts through A TALE OF TWO CITIES and JANE EYRE or kids who simply enjoyed the exploits of d'Artagnan and Natty Bumppo.

Along with its companion lines--CLASSICS ILLUSTRATED JUNIOR, PICTURE PROGRESS, CLASSICS ILLUSTRATED SPECIAL ISSUES, and THE WORLD AROUND US--CLASSICS ILLUSTRATED embodied the Horatian ideal of mixing usefulness and pleasure, delighting generations of young readers while instructing them. Other comics reserved space for advertisements for Charles Atlas bodybuilding programs or mail-order monkeys that fit in tea cups. Inside cover space and back pages in the Gilberton series were devoted to "Who Am I?" literary quizzes; synopses of great operas; biographies of the particular book's author, "Pioneers of Science," historical figures, and sports heroes; articles related to the subject of the book adapted; practical science experiments; and even capsule histories of Great Britain and the American Civil War.

A student of popular culture can learn much from CLASSICS ILLUSTRATED about postwar America's assumptions about the interests and capacities of its children. Shakespeare's language may have been abridged, but it was never rewritten. Sydney Carton may have been painted to look like Tab Hunter on the cover of the 1956 revision of A TALE OF TWO CITIES, but he still went to the guillotine. Though trimmed to ... forty-eight pages, Javert's obsessive pursuit of Jean Valjean and Edmond Dantes's implacable quest for vengeance were faithfully represented. The ugliness of racial hatred was not disguised in either UNCLE TOM'S CABIN or PITCAIRN'S ISLAND.

A chronological review of CLASSICS ILLUSTRATED art and adaptations reveals the evolving seriousness of purpose that animated the efforts of publisher Albert L. Kanter, editors Meyer A. Kaplan and Roberta Strauss Feuerlicht, scriptwriters Ruth A. Roche, Kenneth Fitch, and Alfred Sundel, art directors Alex A. Blum and Leonard B. Cole, and artists George Evans and Norman Nodel. When he launched CLASSIC COMICS in the fall of 1941, at the peak of the so-called Golden Age of comic books, Kanter was attempting to wean young readers from ACTION COMICS, DETECTIVE COMICS, and MARVEL COMICS, employing the same medium to win new adherents to the works of Dumas, Scott, Cooper, Melville, and Dickens. As the series progressed, the emphasis on its character shifted from comics to illustrated books and led to the new name, CLASSICS ILLUSTRATED, in March 1947.

The change of focus, however, led to something of an identity crisis for CLASSICS ILLUSTRATED. Many educators looked at the issues and saw comic books, pure and simple. To the extent that the series in the early years (1941-44) bastardized the originals--and one need only look at the 1943 edition of DR. JEKYLL AND MR. HYDE to see how corrupted a text could become--the critics reviled CLASSICS as worse than regular comic books because they polluted great literature and subverted high culture. The Fact that only a handful of adaptations took the liberties attributed to all was strategically ignored.

This point of view persists to the present, and it is not uncommon to hear the assertion that it is impossible to turn, say, FAUST into a comic book without trivializing it or--the most withering contemporary indictment--rendering it middlebrow. One cannot counter so absolute a prejudice with reasoned argument; one can only hold up the CLASSICS ILLUSTRATED version of Goethe's masterpiece and trust that the adaptation by Alfred Sundel and the illustrations by Norman Nodel will persuade.

In any event, the series was never intended to replace the original works (as the Walt Disney versions of WINNIE-THE-POOH and THE LITTLE MERMAID threaten to do). It is unlikely that anyone who read the sequential-art abridgments of THE HOUSE OF THE SEVEN GABLES or SILAS MARNER as a means of avoiding Nathaniel Hawthorne or George Eliot would have read those authors in the first place. What CLASSICS ILLUSTRATED and its offspring did with increasing skill between 1941 and 1962, when original-title production ceased, was to make the realms of the literary and historical imagination accessible and immediate.

While the complaint from one side of the cultural chasm was that the CLASSICS were too much like comic books and were therefore meritless, the cry from the comics camp was that, with their lack of original stories and innovative art, they bore too little resemblance to comic books and were therefore meritless. Indeed, many comics authorities tend to judge CLASSICS ILLUSTRATED on the basis of the often badly drawn first twenty-two issues, published between 1941 and 1944, and to be unaware that some of their culture heroes--Jack Kirby, Reed Crandall, George Evans, Joe Orlando, Al Williamson--worked for Gilberton and helped raise the quality of the artwork in the late 1950s and early 1960s to a level unsurpassed in the industry. 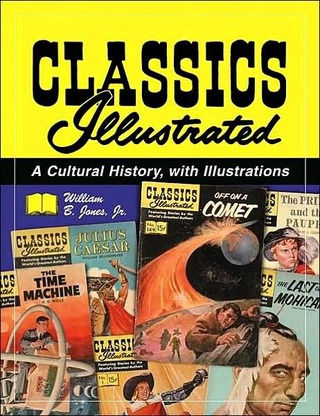