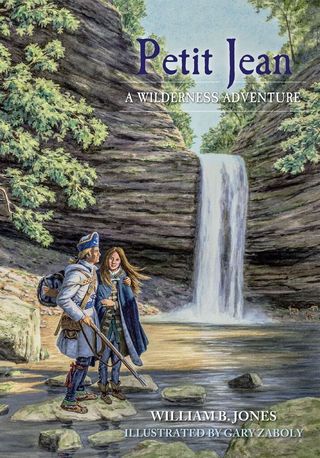 Set in the reign of Louis XV, PETIT JEAN: A WILDERNESS ADVENTURE tells the story of a young Parisian woman who follows her fiancé, a French Marine officer, disguised as a cabin boy across the Atlantic and the Caribbean and up the Mississippi and Arkansas Rivers to a mountain that bears the heroine's name. The historical novella is a relaunching of a popular legend associated with a beloved natural landmark. An epic quest narrative, it weaves together strands of adventure, Native American culture, mistaken identity, humor, tragedy, and enduring love. PETIT JEAN is a recipient of the Arkansas Historical Association's Susannah DeBlack Award for Best Book in Arkansas History for Young Readers.

A significant expansion of the critically acclaimed first edition, CLASSICS ILLUSTRATED: A CULTURAL HISTORY, SECOND EDITION, carries the story of the Kanter family's series of comics-style adaptations of literary masterpieces from 1941 into the 21st century. This book features additional material on the 70-year history of Classics Illustrated and the careers and contributions of such artists as Alex A. Blum, Lou Cameron, George Evans, Henry C. Kiefer, Gray Morrow, Rudolph Palais, and Louis Zansky. New chapters cover the recent Jack Lake and Papercutz revivals of the series, the evolution of Classics collecting, and the unsung role of William Kanter in advancing the fortunes of his father Albert's worldwide enterprise. Enhancing the lively account of the growth of "the World's Finest Juvenile Publication" are new interviews and correspondence with editor Helene Lecar, publicist Eleanor Lidofsky, artist Mort Kunstler, and the founder's grandson, John "Buzz" Kanter. Detailed appendices provide artist attributions, issue contents and, for the principal CLASSICS ILLUSTRATED-related series, a listing of each printing identified by month, year, and highest reorder number. New U.S., Canadian and British series have been added. More than 340 illustrations--most of them new to this edition--include photographs of artists and production staff, comic-book covers and interiors, and a substantial number of hitherto unpublished original cover paintings and interior line drawings.

A restoration of the 1961 Jack Kirby CLASSICS ILLUSTRATED edition of THE LAST DAYS OF POMPEII, with the cover image taken from the original cover painting and the interior pages from the Gilberton proof sheets. A 2011 introduction by William B. Jones Jr. discusses the curious literary legacy of the author, Lord Lytton, and the place of issue No. 35 in the publication history of CLASSICS ILLUSTRATED.

CLASSICS ILLUSTRATED tells the story of Albert Kanter's comic-book series that, from 1941 to 1971, introduced millions of readers to "Stories by the World's Finest Authors." Lavishly illustrated, the book relies heavily on interviews and correspondence with artists such as Lou Cameron, George Evans, Gray Morrow, and Rudi Palais.

JOAN OF ARC (CLASSICS ILLUSTRATED No. 78)

Jack Lake Productions reissue of CLASSICS ILLUSTRATED No. 78, JOAN OF ARC, contains the original painted cover and Henry C. Kiefer's original interior art. A 2009 introduction by William B. Jones, Jr., discusses the life and legend of the Maid and the history of the 1950 CLASSICS ILLUSTRATED title.

THE HUNCHBACK OF NOTRE DAME (CLASSICS ILLUSTRATED No. 18)

Reissued, recolored edition of CLASSICS ILLUSTRATED No. 18, THE HUNCHBACK OF NOTRE DAME (2009).