From THE LAST DAYS OF POMPEII: INTRODUCTION, copyright 2011 by William B. Jones Jr. (Jack Lake Productions):

"It was a dark and stormy night." Unfortunately for the public memory and critical reputation of the author who penned the first seven words of the novel PAUL CLIFFORD (1830), that often-parodied quotation has overshadowed almost everything else written by Edward Bulwer-Lytton (1803-1873). His name has become a synonym for overwrought, melodramatic prose, as evidenced by the annual Bulwer-Lytton Fiction Contest in which contestants vie to create deliberately bad opening sentences for the "worst of all possible novels." Few remember that he was responsible for other familiar quotations: "the Great Unwashed" (PAUL CLIFFORD, 1830); "the pen is mightier than the sword" (RICHELIEU, 1839); and "pursuit of the almighty dollar" (THE COMING RACE, 1871).

Even fewer remember that in the 19th century the first Baron Lytton was a major literary figure. He was a friend of Charles Dickens; it was he who suggested a change to a "happy" ending for GREAT EXPECTATIONS. Bulwer-Lytton was also something of an innovator in fiction, particularly with his novels ZANONI (1842), a pioneering supernatural novel set during the French Revolution; THE CAXTONS: A FAMILY PICTURE (1849), which paved the way for the popular Victorian domestic-novel genre; and THE COMING RACE (1871), a precursor to H.G. Wells-style speculative science-fiction. The very qualities that, in the author’s lifetime, readers valued in his prose—the florid sentences, the elevated diction, the mannered circumlocution (in Chapter III of THE LAST DAYS OF POMPEII he describes Roman appetizers as "the first preparative initia of the feast")—were the very aspects of his style that made him all but unreadable to later generations.

One book by Lord Lytton has endured, however, despite the near-oblivion to which most of the others have been consigned. THE LAST DAYS OF POMPEII was an immediate best-seller when it appeared in 1834, and it still can be found in both print and electronic editions. The author stated that "nearly the whole of this work was written at Naples" within view of "the fatal mountain of Vesuvius, still breathing forth smoke and fire." Bulwer, as he was then (the maternal family name Lytton would be added after his mother’s death in 1843), had gone to Italy for his health, as well as for respite from a miserably unhappy marriage. His imagination fired by proximity to the site of the tragedy at Pompeii, the author immersed himself in historical research, including Sir William Gell’s POMPEIANA. He closely studied such ruins as the Temple of Isis and the House of the Tragic Poet, using them as locations for scenes in his novel.

THE LAST DAYS OF POMPEII (March 1947, March 1961) is one of the most significant titles in CLASSICS ILLUSTRATED history. The March 1947 edition, No. 35, was the inaugural issue under the banner of the "newer, truer"series name, CLASSICS ILLUSTRATED, which replaced the CLASSIC COMICS trademark. The 1947 version was also the first complete book assigned to Henry C. Kiefer, whose name would become nearly synonymous with CLASSICS ILLUSTRATED during the next six years. With the Gilberton Company pairing the new name (a bid for enhanced product prestige) and the new artist (who had contributed a cover and two splash pages for CLASSIC COMICS No. 33, THE ADVENTURES OF SHERLOCK HOLMES), series founder Albert L. Kanter and his son, editor William E. Kanter, were heralding a new corporate and visual identity for their publication.

Scripted by I. Thomas, the 1947 adaptation unfortunately attempts to squeeze too much of Bulwer-Lytton’s novel into the 56-page issue. Episodes are shifted out of sequence, characters are introduced abruptly, and the main storyline is frequently obscured. But Kiefer’s artwork is triumphantly Kieferesque—that is to say, it bears throughout the stamp of the dark promise of mystery and the curious androgynous style that made readers either love or hate the man’s work. Yet the general incoherence of the script, added to what might have been perceived as its overemphasis on the early-Christian theme, doomed Pompeii to a single printing. Like the city, the missing No. 35 was buried and forgotten.

Then, in March 1961, the title was unearthed as part of editor Roberta Strauss Feuerlicht’s policy of refurbishing discontinued older issues. Alfred Sundel’s elegant revised adaptation preserved the main plot points while dispensing with the religious element and the multitude of secondary characters that clogged the narrative in the 1947 version. A dramatic painted cover depicted the fear and panic of the fleeing populace. Most significantly, comics legend Jack Kirby provided the interior art in the only complete CLASSICS ILLUSTRATED title he was assigned. (Most of his Gilberton efforts were confined to WORLD AROUND US or SPECIAL ISSUE chapters.) As the artist later informed CLASSICS collector and researcher Ron Prager, he sped through the pencils for POMPEII in ten days; veteran inker Dick Ayers finished the pages. Although the haste occasionally shows, Jack Kirby’s celebrated originality is clearly present in the character studies of Arbaces and Nydia and in the gladiatorial contests. ... 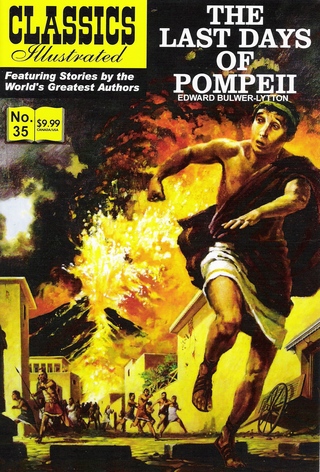