JOAN OF ARC (CLASSICS ILLUSTRATED No. 78)

“Jeanne La Pucelle,” she called herself. “Joan the Maid”--a simple yet assertive self-description that conveys the chastity and strength of the French peasant girl who led an army and crowned a king. On those occasions when the illiterate teenager signed her name, she used the form “Jehanne.” Only later, some years after her death at the stake at the age of nineteen, would she be identified as “Jeannae Darc” and then “Jeanne d’Arc,” or, in English, Joan of Arc. Just as the Maid’s name evolved through time, so have the interpretations of the meaning of her life, from political pawn to national heroine, from accused heretic to canonized saint.

Joan of Arc is one of a handful of historical figures from antiquity to the present who is universally recognized. She seems the stuff of legend, and at times one finds it difficult to believe that so remarkable a person actually existed. Yet the detailed records of her extraordinary life and horrific death bear witness to the Maid’s impact on her contemporaries, whether family, friends, or foes. We know that she spoke with the accent of her native Lorraine; we know the cost of the suit of armor that Charles VII ordered for her in 1429; we know the contents of the letters she dictated; we know the words she used in answering her judges and in meeting her end. No other medieval life has been so well documented.

But the Maid is more than the details in the accounts of her life, and she confounds those who see her through a single lens as a receiver of mystic visions or a champion of a unified France. As Mary Gordon has observed in JOAN OF ARC (2000): “She bursts out of categories, crisscrosses our ideas about her, contradicts the images she has presented about herself” (Gordon, p. 27). At times she appears to be a model of simplicity, yet she delighted in the finery she was given to wear. The humble Maid who heard the voices of St. Michael, St. Catherine, and St. Margaret could also be boastful and quick-tempered. In her persona as the self-styled “chief-of-war” who led French soldiers into fierce battle with single-minded purpose, Joan was also capable of weeping over an English enemy who died in her arms.

JOAN OF ARC became the best-selling biography in CLASSICS ILLUSTRATED history and one of the most popular issues in the series. The skillful and rather comprehensive script by Samuel Willinsky shows certain traces of the influence of the [1948 Victor] Fleming film, as where exposition of the political situation in France occurs in dialogue between Joan and her father (pp. 2-3). The Maid’s trial is given somewhat short shrift (pp. 41-43), but, throughout the forty-five pages, an impressive degree of historical accuracy is maintained.

For JOAN OF ARC, Henry C. Kiefer (1890-1957), one of the two dominant CLASSICS ILLUSTRATED artists of the late 1940s and early 1950s, produced his final—and finest—line-drawing cover for the series and perhaps his best interior art, as well. The original cover is quintessential Kiefer in its deliberately antiquated theatricality. It is distinguished by atmospheric charcoal shading and a burst of brightness at the center where the Archangel Michael calls the Maid to her duty. In the interior, the artist took obvious pains with the composition of both individual panels (pp. 20, 38) and full-page illustrations depicting battle scenes (pp. 22, 29) and Joan’s martyrdom (p. 45). Occasionally, some slight attempt at suggesting the features of Ingrid Bergman is detectable, but for the most part, Kiefer’s Joan is his own.

The line-drawing-cover edition went through three printings by November 1953. It was replaced in September 1955 with a painted cover by an unidentified artist showing Joan on horseback, triumphantly carrying her standard bearing the lilies of France. This iconic image undoubtedly boosted sales of the edition, which saw eight printings by June 1967. A second painted cover, by award-winning Pennsylvania artist Taylor Oughton (b. 1925), appeared on a single-printing release in 1969. Bathed in golden light, the painting’s subject is the encounter between Joan and the Archangel Michael that had been depicted on Kiefer’s line-drawing cover. 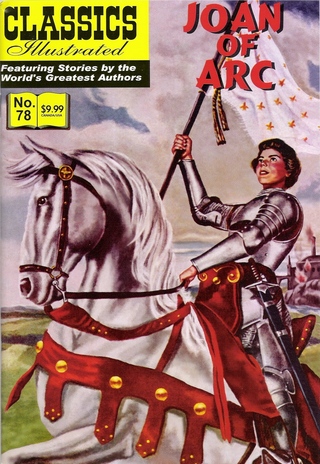